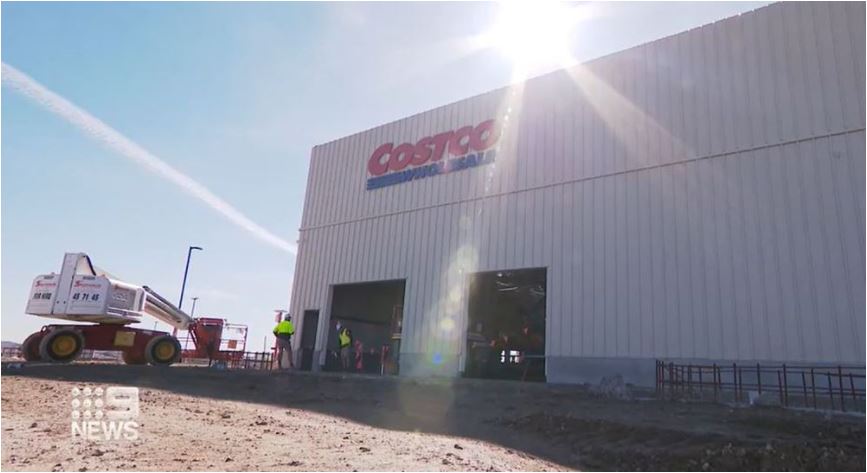 Posted at 17:20h in Uncategorised by admin

Located in Lake Macquarie on the NSW mid-north coast, it will service a vast area from the Central Coast, Hunter Valley, Newcastle and beyond.

When completed in mid-August, it will take $20 million to fill it with everything from fresh meat and produce to clothing, appliances, and even diamond rings.

It will also employ 250 people, with hiring already underway.

In an exclusive interview with 9News, Costco managing director Patrick Noone said a new location on Sydney’s Northern Beaches is also being scouted.

“If we could find the land and do a deal, we’d go into planning right away,” Mr Noone said.

But the roadblocks to opening up more sites, especially in Sydney, include finding land large enough, at the right price, and then having to brave local councils.

The other holdup is time. It typically takes three years from identifying a site to opening the doors.

Competitor IGA also has plans to open in Sydney, with a number of its warehouse-style Supa Value stores on the cards.

“I think Costco would be concerned that other players are now looking at this business model and replicating.”

But Mr Noone said he welcomes the competition.

“Competition is good. It makes everyone a bit sharper. Keeps everybody on their game,” he said.

“In the end, if we sell merchandise at a better fairer price for the Australian public, the public wins.”

Outside of Sydney’s Northern Beaches Costco is also eyeing sites in Wollongong and new locations in virtually every capital city over the next decade.